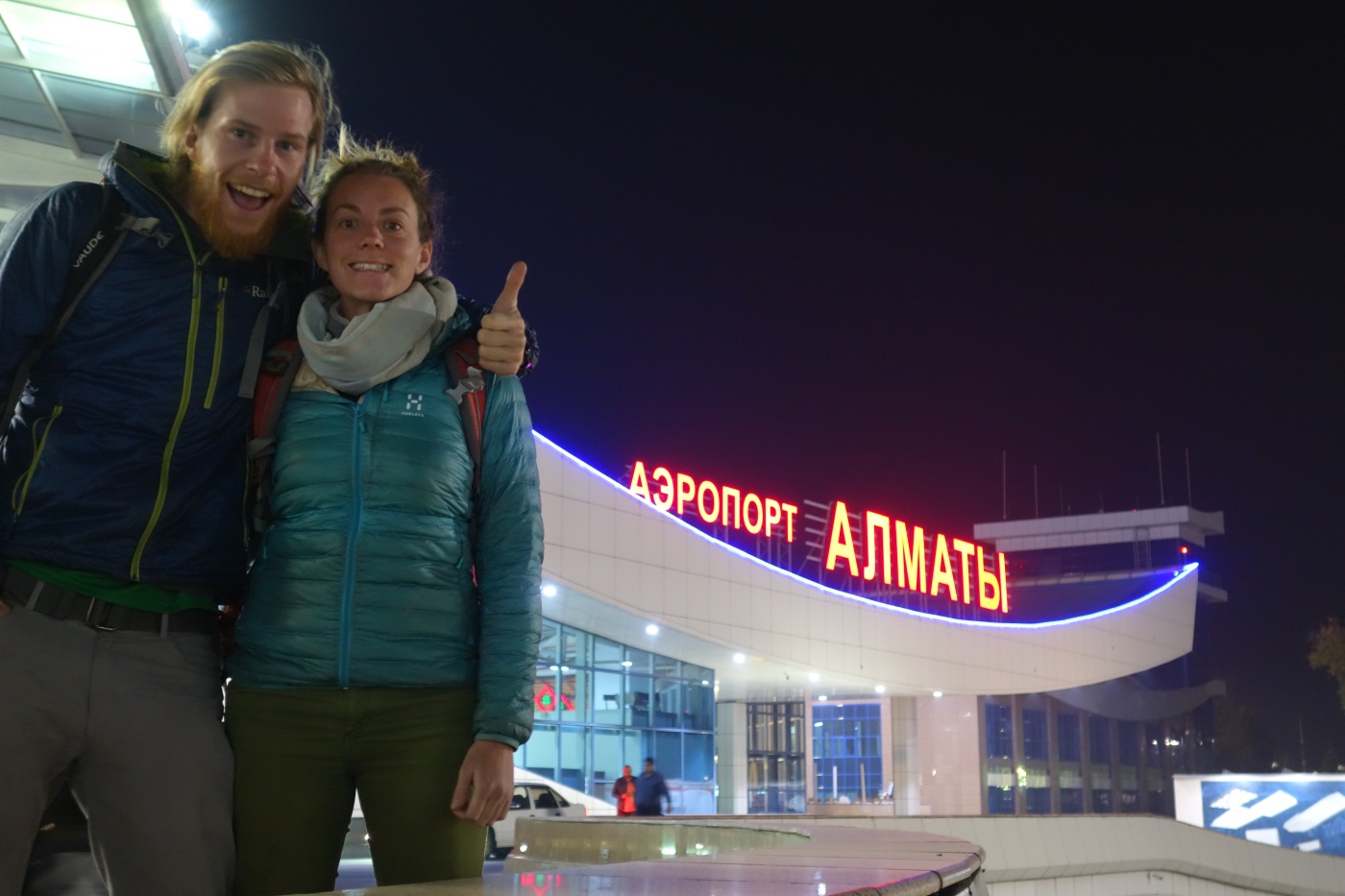 It was getting pretty chilly as we left Kyrgyzstan. Snow covered the passes, we were shivering in our  winter motorbike gear, and each night we huddled together in the tent against the cold. But by the time we had negotiated the politically stressed border between Kyrgyzstan and Kazakhstan (presidential elections were taking place), we really wondered what all the fuss regarding the cold had been about! It was positively balmy as we set up camp atop a small hill overlooking a copper and yellow parched grassland. The mountains were behind us, their white peaks appearing as clouds on the distant horizon, in front of us lay endless golden fields. We had come full circle in Central Asia, and returned to the Steppe. 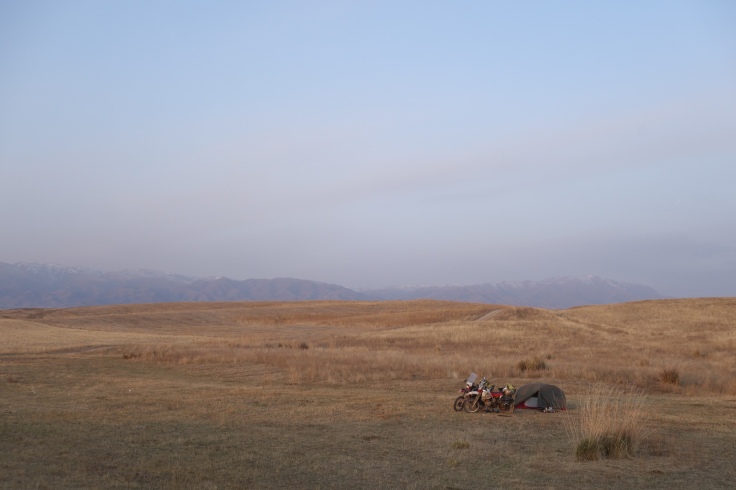 But this time it didn’t feel as endless and daunting. This time we wanted to get lost in it. To ride its vast expanses. To hide from the fact, that for this year at least, the ride was over. We were making our way to Almaty, Kazakhstan’s second city and cultural hub, to fix up the bikes and tuck them away to endure a harsh winter. As we limped across it, on bikes suffering from their mammoth endurance event, the steppe, reluctant to see us go gave up its final mysterious offerings. 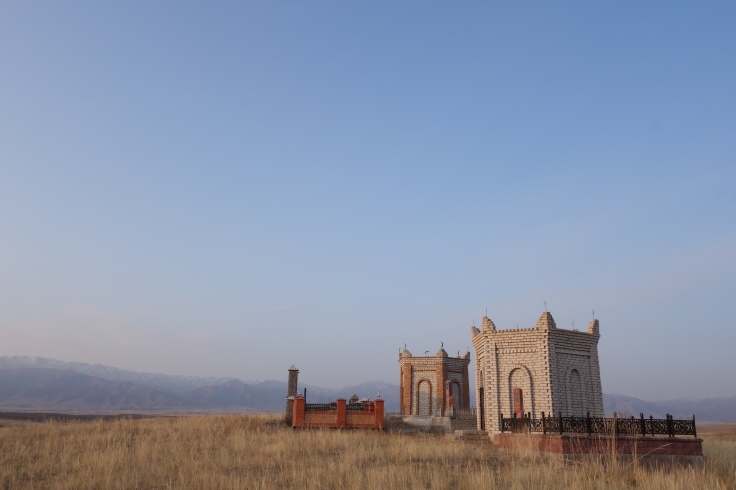 Tamgaly petroglyphs are an underrated UNESCO world heritage site hidden in a remote valley. Having already visited a number of petroglyphs sites in Asia, which had ranged from mildly average to exceedingly disappointing, we deliberated our decision to drive 150km off route to visit a pile of rocks. However, reluctant to reach Almaty, we decided to take the risk. It was one worth taking, the petroglyphs were mind blowing. Ranging from 5th century BCE to 15th century CE there was over three thousand carvings, stunningly preserved, including rare hunting scenes, intricate animals with mythical beings on their backs, and seven sun gods overlooking an open air temple. 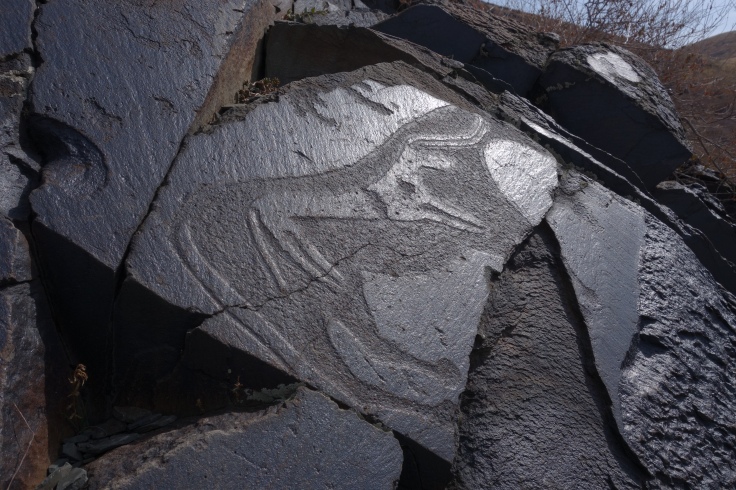 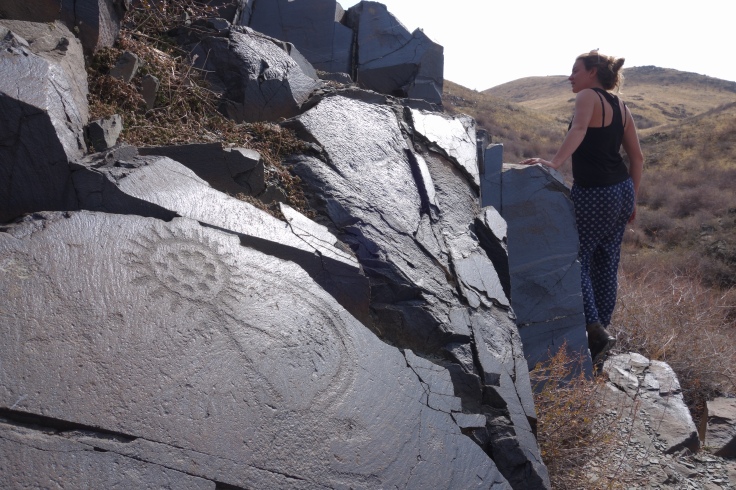 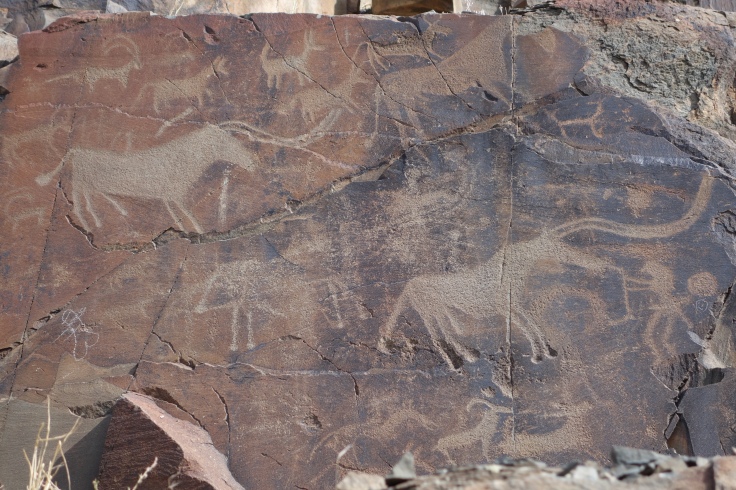 In the car park we were surprised to see a German couple whom we had met in Kyrgyzstan setting up their van for the night (it really is a small world)! We camped alongside them, envying their elevated position as we slept amongst the vipers and scorpions that threatened to creep their way into our now broken tent. The tent wasn’t the only thing that was broken. Lottie’s bike had taken a bit of a battering, her screen, speedo, indicators were all missing, clutch cable and wheel bearings were shot and the engine emanated a mysterious ticking noise. Ryan’s bike had fared better (because he didn’t drop it all the time!), but his motorbike gloves were torn to sheds, and his gear suffered gaping holes. Our stove was playing up, our eating bowls were broken, and poor Ryan was sleeping without a roll mat, due to his delaminating and developing a huge tumor.

But we couldn’t hide in the steppe forever. With tears in our eyes and an adventure under our belt, we rode into Almaty, allowing ourselves to be swallowed by the modern metropolis, its shining steel towers, four lane highways, coffee shops and steak joints, designer clothing outlets and craft beer. Almaty is in a unique position. The bleak, desolate steppe laps its northern and western fringes, whereas to the south and east, huge mountains soar over the city, hemming in any further development. It is home to some of the richest people in the world, new money, made from the extensive oil and gas resources gradually being unearthed across the country.  Ski slopes and ice rinks overlook sleek shopping malls, where women of both Russian and Kazakh descent, stalk the streets in designer heels,  wrapped in furs. 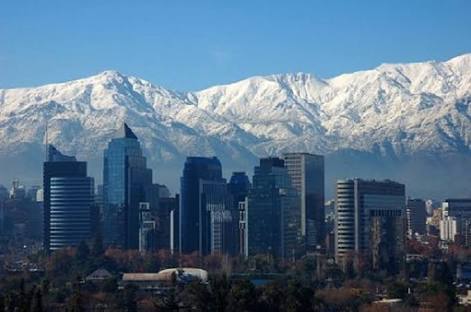 It is also home to a fantastic motorcycle garage, ‘Freeriders’. They were shocked to see us,  most overlanders had left months ago!  Kindly they showed us directly to a hot shower and then we discussed business. We needed somewhere to work on the bikes and somewhere to store them for the winter that would not cost the earth. For £100 each, Freeriders provided us an amazing garage space and would store our bikes safe and sound in their show room (though why they would want our ugly ducklings next to their beautiful display of shiny sports bikes we have no idea). Needless to say we moved straight into the garage and began work. The mechanics at the garage were incredibly kind, helping us muddle through our list of jobs, and the staff at the shop were unfailingly helpful and supportive when we badgered them for the price of various parts. Thanks very much ‘Freeriders’!!

Working on the clutch

It was easy to settle into life in Almaty. Natasha, the cook at the hostel spoiled us each day with pancakes and fruit. At night we would curl up with the Persian cat and watch movies or chat to other guests. We ate pizza and learned Russian (the main language in Kazakhstan), and on days off from the garage we explored the soviet history of the city. 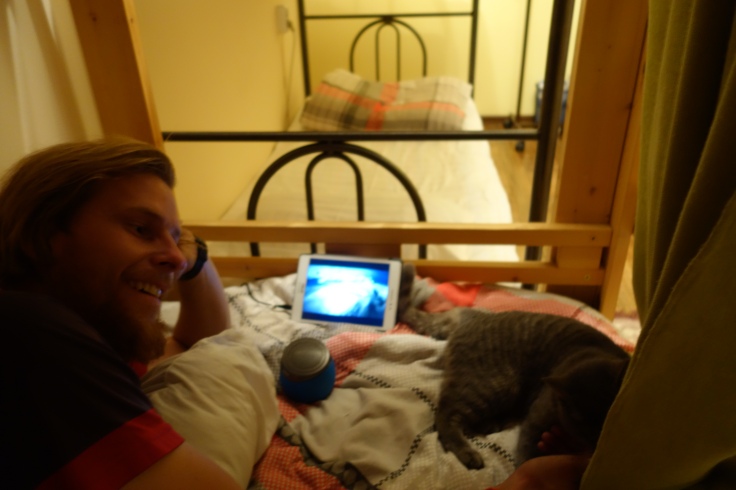 But we had made a decision whilst in Kyrgyzstan. Despite our desire to stay with the bikes, a winter in central Asia, with temperatures plummeting to minus forty degrees would not be pleasant. Further to this, the Russians have made it pretty tricky for us British folk to get a visa anywhere outside of the UK, so we needed to take residence somewhere for 90 days or more. Preferably somewhere warm, and definitely somewhere cheap, where we could have a different kind of adventure as we wait for the snow to melt. So we decided to fly to India, its diversity, colour, history and delicious food promising a winter of exploration, and of course, a bit of sun!

Packing our bags to leave, we reflected on our journey so far. We have had the time of our lives. Some of the roads we had ridden had been spectacular. A particular highlight being the Bartang valley in remote Tajikistan. It had seemed unattainable, especially to Lottie, who had never ridden anywhere off road before, but it was one of the best rides of our trip. We recalled the incredible hospitality we had been shown throughout our trip, but most remarkably in Turkey, where we could enter no town without offers of chai, food and a place to stay coming from every angle. We have had the opportunity to climb five thousand metre peaks in the Pamir, revel in exotic history in Uzbekistan and had been surprised at the richness of culture and breathtaking scenery in the Balkan states. We have had time to live life to the full, to open our eyes and lives to new opportunities and new friends. 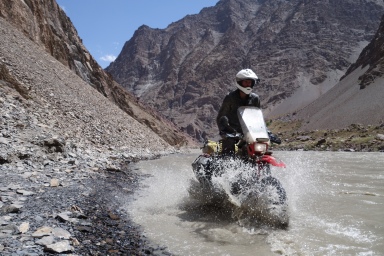 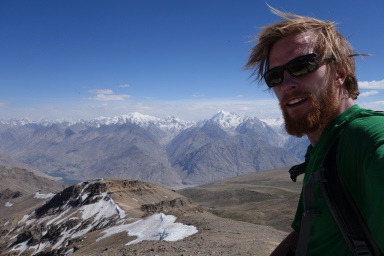 View over the Hindu Kush 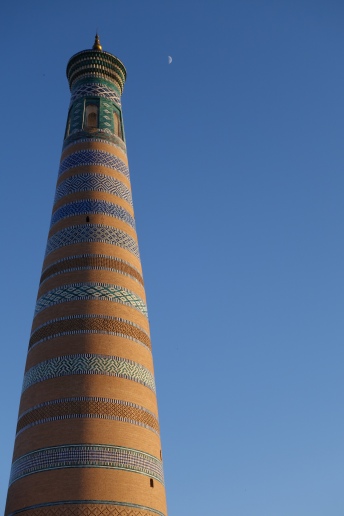 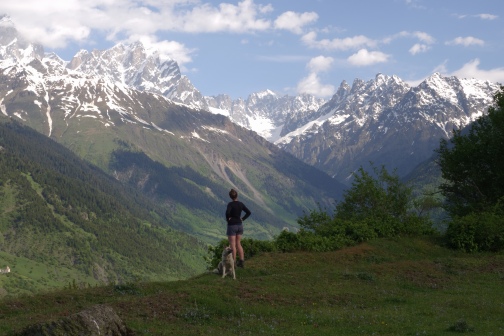 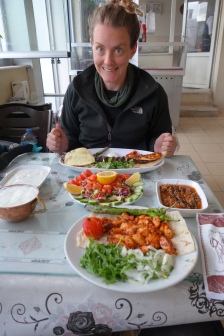 But life on the road hadn’t been easy.  We remembered day one, breaking down on the M6, feeling incompetent, out of our depths, and stupid for thinking we could drive to the other side of the world. We had broken down on the border of Afghanistan; we had crashed 100km from civilisation in the middle of the Uzbek desert; it had rained and rained and rained as we crossed Europe leaving us and our gear soggy and miserable. Oh, and there was the time Lottie discovered she had left her motorbike documents over 1000km away in a photocopier on the other side of the Steppe.  But from these tribulations we had also learned that every problem has a solution, in fact, the further away from the UK we were, the easier the problem was to solve! Our faith in humanity grew, as across the world, kind generous people, of all creeds and colours, put themselves out to help us get back on our way. We learned that the biggest adventures often happen when things go wrong. 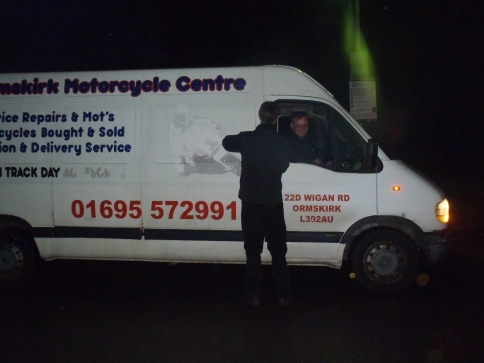 Roy who rescued us on the M6 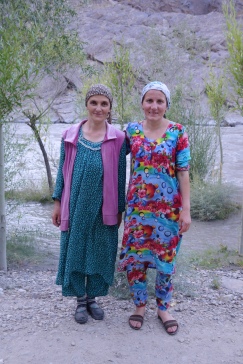 Tajik ladies who fussed and fed us in the Bartang 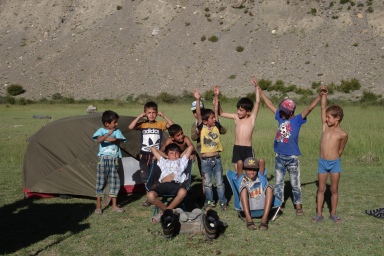 Village boys helping us put up our tent 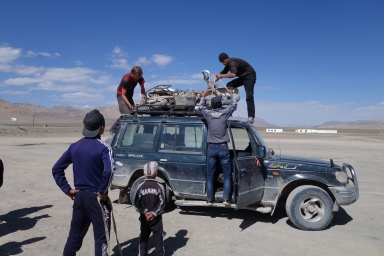 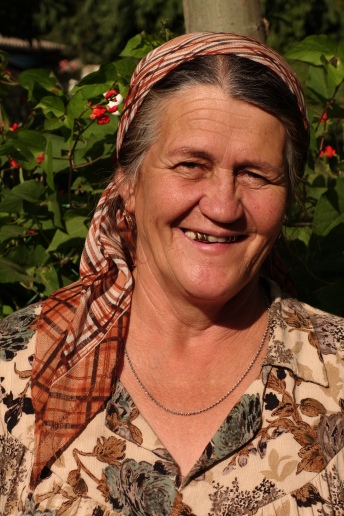 The kindest lady, took in a tired and emotional Lottie on the Afghan border 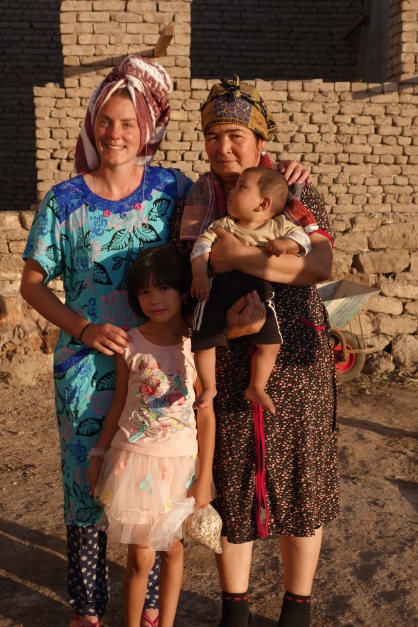 Uzbek family who fed us A LOT! 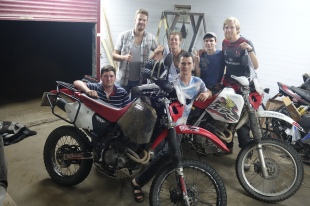 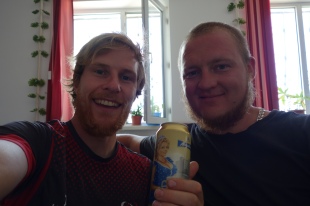 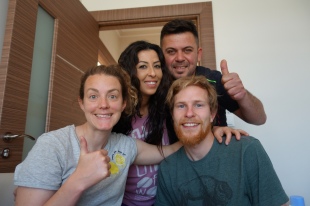 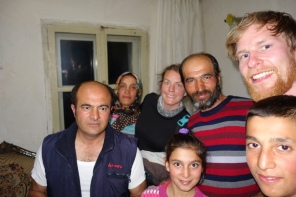 Deepest darkest Turkey, this family took us in after we had a bad encounter with the ‘police’ 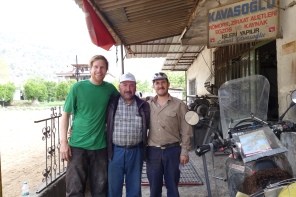 ‘Problem you’ for these Turkish welders

Slovenian ladies who helped us when our bikes were nearly stolen 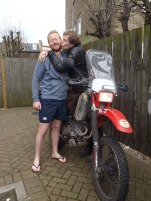 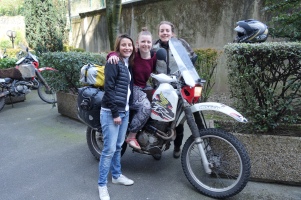 Babes putting us up in Paris

We nearly stayed with Victor forever

After ‘akuda?’ one of the most common questions we have been asked along the way is ‘what is it like to travel as couple’? Well, trust us, it can be extremely difficult! We effectively spend 24 hours a day in each others pocket, and this means we have learned exactly what buttons to push to wind each other up. We argue about directions, food, where to put up the tent, the weather….you get the picture. We take out our frustrations on each other, and blame each other when things go wrong. We are not proud of it, but frankly, sometimes we are horrible to each other!

However, sometimes (very rarely), we are nice to each other!! We feel like the luckiest people in the world to share this incredible journey with each other. We have learned how to recognize when the other needs space, we have revelled in our achievement when we have tackled a difficult road. We have sat out under startlit skies reflecting on the meaning of life, enjoyed incredible sunsets over surreal landscapes, strung up our hammock and reminisced to a soundtrack of our teenage years. We have laughed and laughed, cried and comforted, but most of all we have ‘chatted shit’. We are exceptionally good at it. The recordings from our headsets prove it. We spend hours and hours talking to each other, debating, reflecting, deliberating, planning, and for us, this is the best thing about travelling together. Time to ‘be’ together. 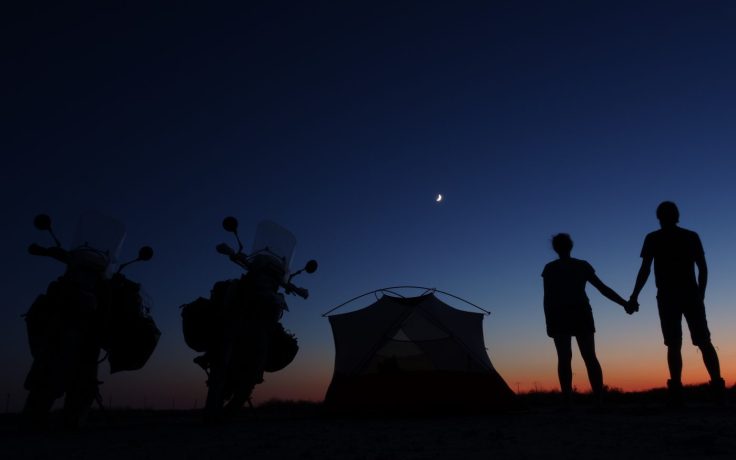 But lets face it the relationship stuff is boring, the thing that everyone wants to know about, the thing that has more instagram hits than beyonce’s bum, is Ryan’s beard. How did it get to be such a vibrant orange? How does Ryan achieve the perfect ‘homeless’ look, just with a few strokes each day? And for just how long will Lottie put up with the ever growing ridiculous nature of Ryan’s facial hair? Don’t worry the ginger monstrosity is going nowhere just yet. Well, it is going to India, to be admired by many wannabe ginger men. Perhaps it will even get the opportunity to star in a Bollywood movie!

And so, we are sad to say, we are packed, leaving on a jet plane. Over the Himalayas India beckons. The ride is over for this year, but what a ride it has been.

5 thoughts on “Leaving On A Jet Plane”