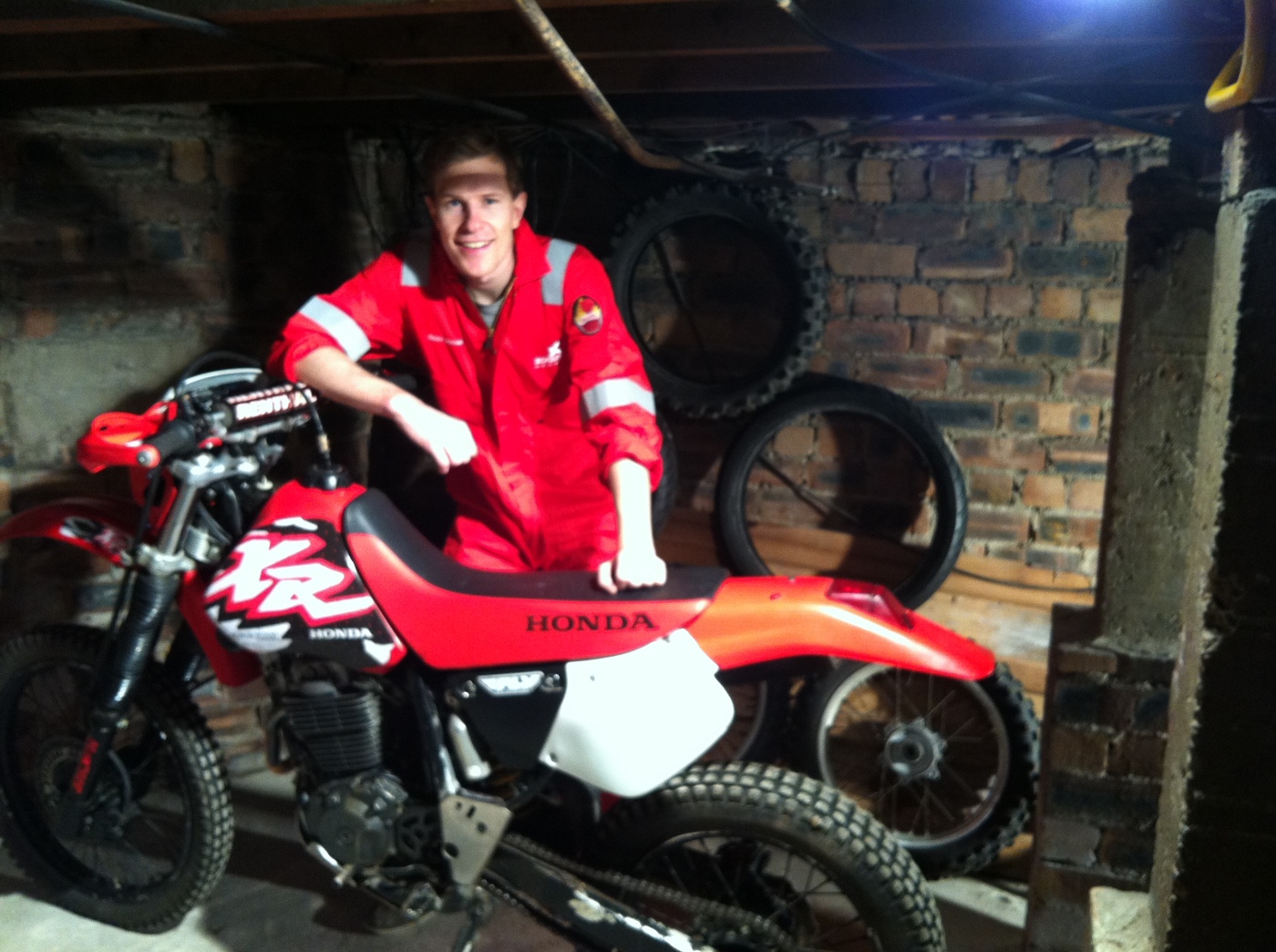 OK, OK, before you continue reading, all my feminist friends (you know who you are Anna Malzy) can calm down, because as much as Ryan doesn’t want me to be, I am also a resident of the ‘man cave’. Making it a somewhat modern, forward thinking, hipster, gender neutral ‘ze’ cave (according to the Oxford Union). Anyway.It looks like this…

It is with great sacrifice that our dear friends Roger and Rosie, have handed over their recently acquired basement, to be filled with  tools, tyres and tinkering. Things have been going well, the cave has been filled with two motorbikes, a bunch of tools, including a bench vice, that Roger insists he will use, (to pretend he is hardcore), after we have gone.  Roger and Rosie have even cooked us two delicious evening meals in the space of a week! I am  sure however, that their joy at having a ‘retired’ wind farm engineer in a  red jump suit, lurking in the  basement, will wear off as he begins to leave oily smudges over their fridge and kettle! Until that point, we are lucky and ever so grateful to have the space to begin working on the bikes.

There is a lot to do. Main jobs on the bikes include strengthening the frames, building pannier racks, replacing the fuel tanks, and servicing the engines.

My bike with the new tank on

Will it make it to China?

I am still working, so the main tasks are falling to Ryan, who is starting with making my bike road worthy. He is also painstakingly designing the pannier racks that will enable us to carry our gear whilst at the same time adding strength to the frames of the bikes.

As the months have passed, panic has set in, never ending lists have been written, and we are becoming increasingly overwhelmed with the amount of prep that still lies before us. Since our last post, a lot has changed, including the route we intend to take. Originally, we had planned to pass though Iran, and through Pakistan into India. However, the expense of carnets (temporary import licences for the bikes) was humongous. So we have made the difficult decision of dropping Iran and Pakistan from our travels, and are now heading into the Caucasus region of Russia, before passing into Kazakhstan. The new route looks like this:

This change means much of the previous research that was carried out in terms of budget/visas/vaccinations, is now redundant, and we reluctantly have had to start this again. However, the paperwork side of things is slowly coming together. Injections are being painfully undertaken, visas and where to (hopefully) acquire them, are pencilled in, and all that remains is to find someone crazy enough to insure us!

Passing through the former Soviet Union requires us to have all of our documents translated into Russian, and I am spending my half hour lunch breaks learning the cryllic alphabet, in the hope of being able to navigate the paperwork and the road signs! I have also been researching Russian culture, and have resigned myself to the fact that it may take us much more time than expected to cross the region, due to the copious amount of vodka that will be enforced on us! Apparently, the only way for Ryan to get out of a shot, is by telling them that I have banned him from drinking!

It is in these final weeks,  with the mad rush of preparation is upon us,some difficult goodbyes have to be said. Last week I reluctantly said goodbye to my beloved hunk of junk, the red suzuki bandit, that has been my reliable companion for the past six years. Putting it up for sale as a non-starter, I was convinced it would end its days listed in parts on ebay. When it sold within 10 minutes, I was both shocked and surprised that the man who bought it wanted to painstaking restore it to its former glory. Ryan’s bike is yet to find a new home, but I am sure, when the day comes, he will be inconsolable with grief. I’ve heard that the greatest of adventures always occur after the hardest goodbyes (insert cheesy quote here!).

I will leave your imagination then, in the gloom of the man cave. As you sit in your cozy living room, or at your warm office desk, spare a thought for the troll in the red jump suit squirrelling away.You may want to consider sending him some moral support, or maybe even some chocolate digestive biscuits, all will be gratefully received. But whatever you do, please do encourage him to stay in the cave-I am enjoying the peace and quiet!!

2 thoughts on “Welcome to the ‘man cave’”