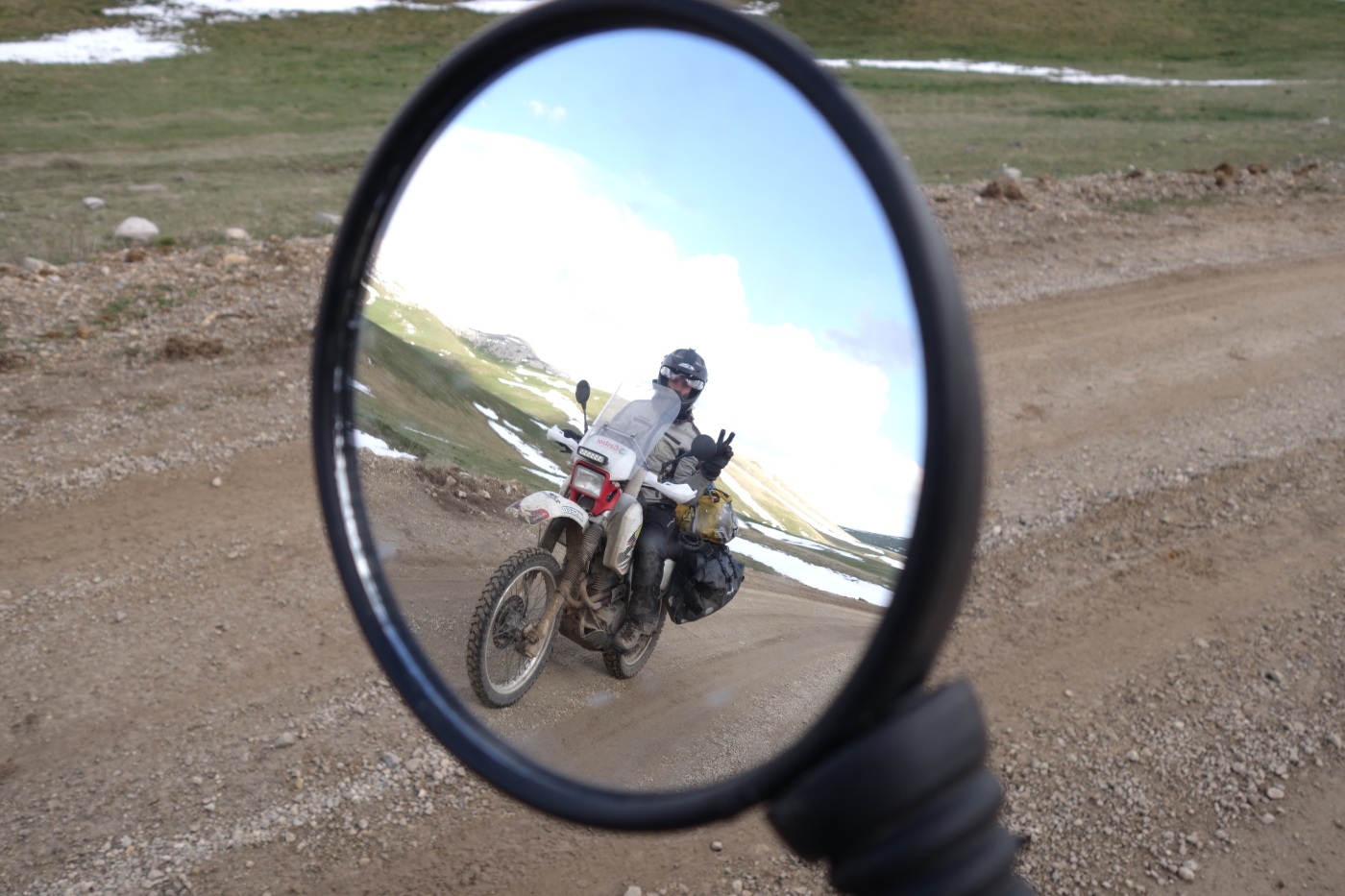 Since leaving Slovenia, we have crossed 4 countries, eaten 42 cevapi and done 1 illegal poo. Further to this, with its craggy, mountainous landscapes, unbelievable roads and warm generous people, its safe to say that the Balkans lived up to our high expectations. So much so in fact, that despite just ‘scooting’ through it, we ended up staying twice as long as we expected to!

Initially it was just a quick foray into Croatia, as we made the shortest crossing from Slovenia to Bosnia and Herzegovina (BiH). Despite such a short stay, we were still blown away by the beautiful scenery. Slunj village, which literally straddles dozen of waterfalls, and the Plitvice National Park were particular highlights.

We didn’t anticipate, upon leaving the EU, the change would be so noticeable. But, entering BiH on a late afternoon, we were both taken aback by its discernible lack of wealth evident as soon as we crossed the border. Many people were herding goats across the street, packs of dogs roamed the roadside, knock-off CDs were being sold out of the back of beat-up cars. On top of this, the spires of minarets rose from the hillsides, quite different to the hill top churches of Slovenia and Croatia.

Out of our comfort zone, late in the day, we were nervous about our first wild camp. Although not illegal in BiH, the threat of discovering one of the thousands of unexploded land mines lay heavy on our consciousness as we turned off the main road to search of a quiet place. The track we originally chose led to a small field where seven or so large dogs were tethered to sticks. They barked aggressively at us as we did a swift ‘u-turn’ and headed to an adjacent field. The night was restless, both of us worrying, not to mention absolutely freezing again! The next day we both felt a little sheepish when the local shepherd and his seven lovely dogs bounded up to us to say a say hello. The large dogs so aggressive the night before, were intimidated by Ryan (probably because of his mega muscles and manly beard) and busy licking Lottie’s hand.

We had heard that the people of BiH were warm, kind and generous, and after a beautiful ride through Una national park, we were to experience our first taste of Bosnian hospitality, quite literally as we drank Rakija with a local gardener at 11am. This was followed shortly after when we descended out of the snow into bullet scarred Dvar, which saw its majority Croat population expelled during the brutal fighting which tore apart the country in the early 90s. In the local biker cafe we met Vladimir who enlightened us to Bosnian history, language, food and the best roads to ride. 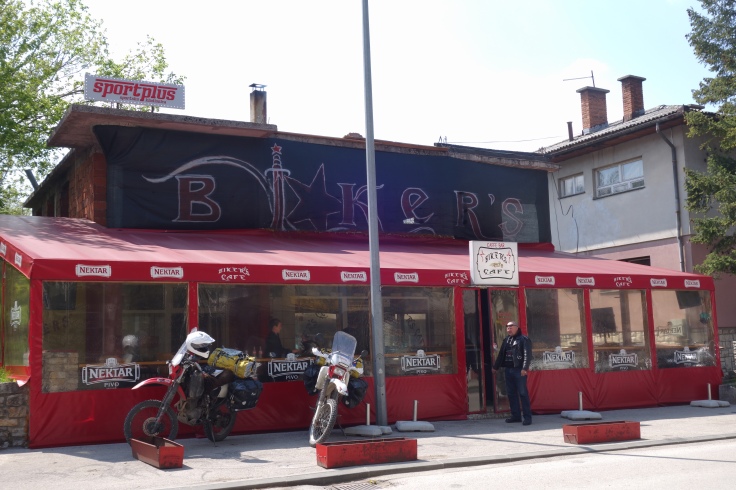 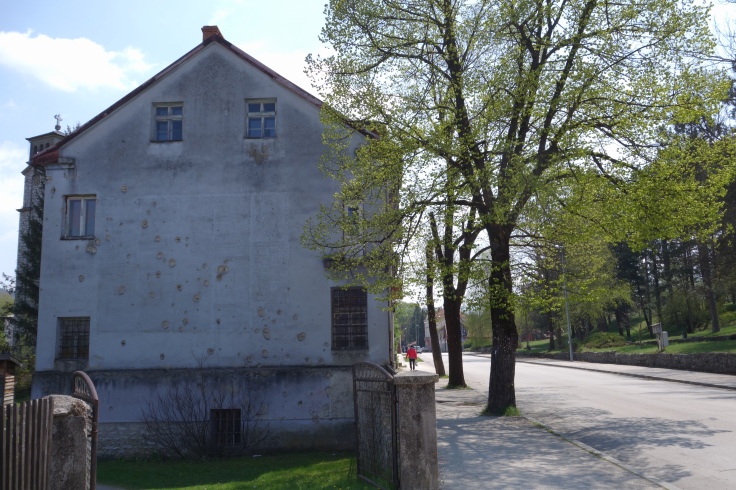 On to Livno, where we only stopped to pull on an extra layer, we quickly got invited in first for coffee, then cevapi and finally back to the home of lovely Azra and her family. Our unexpected overnight in Livno really was a highlight of our adventure so far and not just because of the warm bed, lovely food or even surprise visit to a derelict cold war nuclear bunker! Instead it was the kind hospitality, willingness to share and great company that Azra and her family demonstrated that neither of us will forget and both of us would like to replicate. 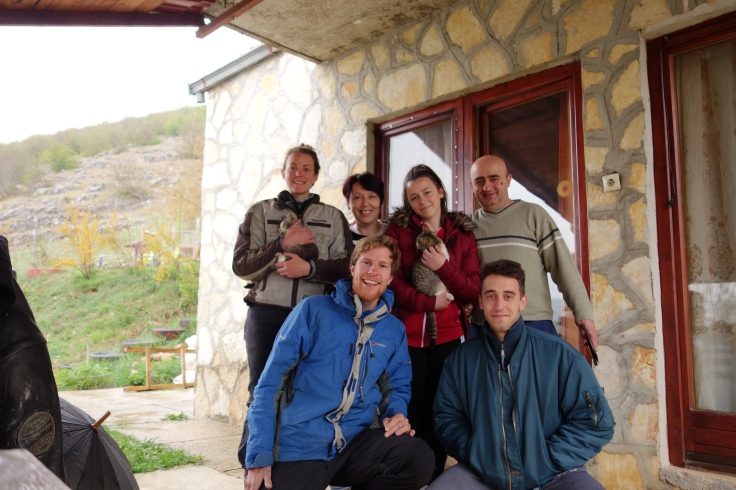 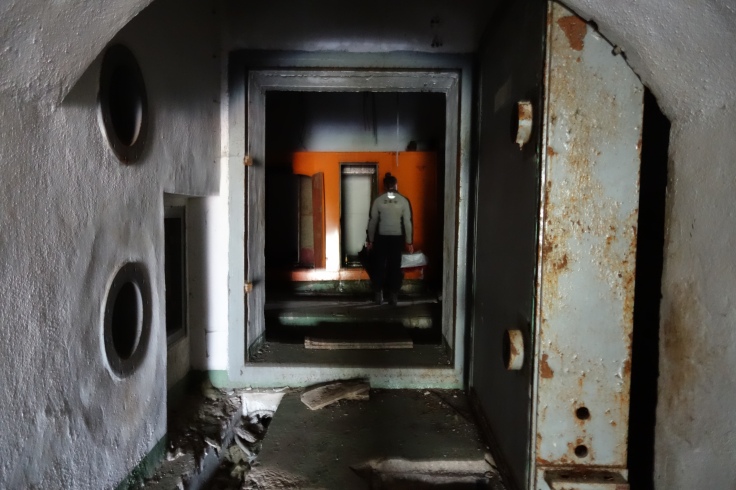 The war scarred towns and landscape we passed through on our way to Sarajevo served as a constant reminder of the very recent conflict. We were lucky enough to stay at Haris Youth Hostel (www.huh.ba) where our host Haris, not only put on a great rooftop BBQ, but shared his own experiences of living under siege in Sarajevo. 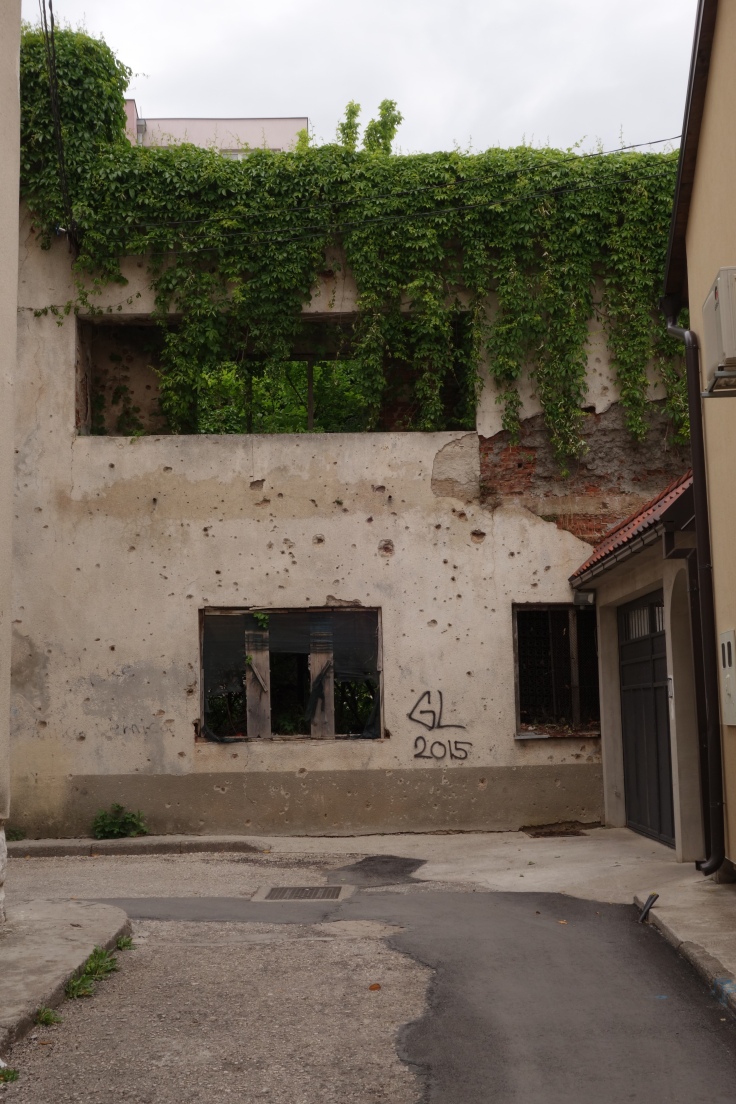 This was brought to life further by our visits to the Srebrenica gallery and the ‘Tunnel Museum’. The colour footage was a potent reminder that these atrocities happened, with the world’s media watching, and within our lifetimes. It was impossible not to reflect on the current situation in Syria, which bears so many similarities. Sarajevo’s real character however, lies not in its pockmarked houses and bloody history, but in its multicultural mix of people, its post-war optimism and authentic charm.

Remembering the good old days when she was free and single, Lottie was keen to revisit Dubrovnik, the beautiful old city on the coast of the Adriatic. This meant another swift trip to Croatia, but being cheapskates we camped close to the border in the mined Bosnian hills above the town. Riding into Dubrovnik we were pleasantly surprised not to have to pay for parking, got ourselves a coffee and ducked through the ancient walls to explore. 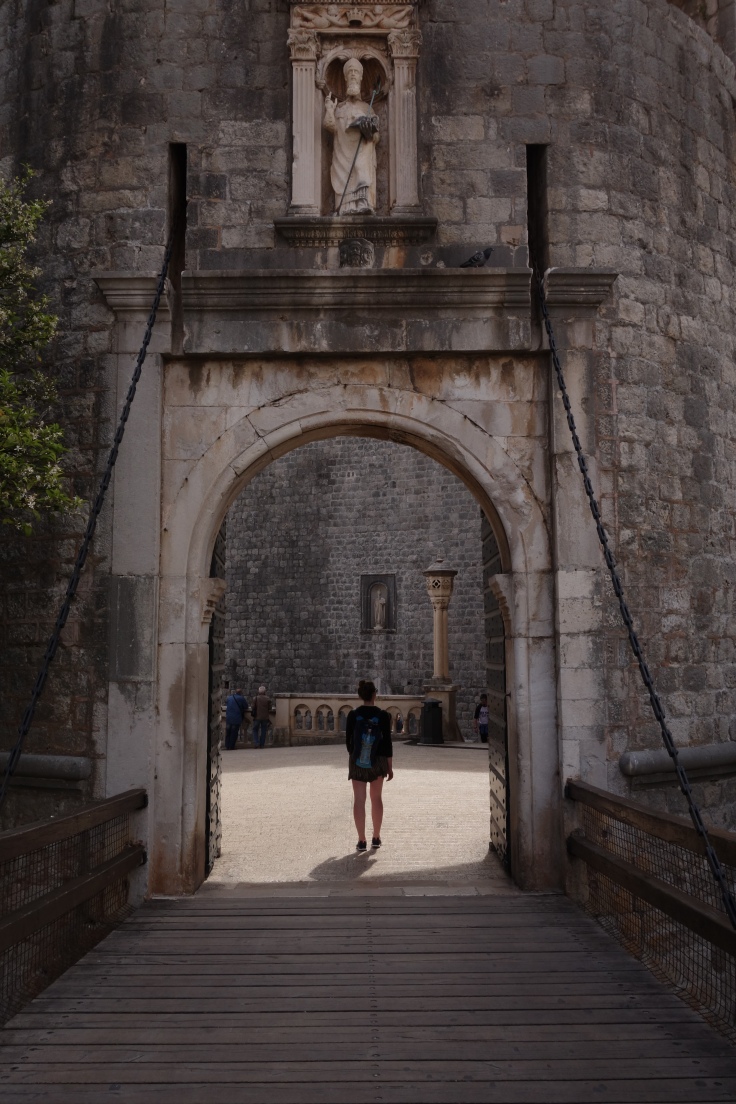 Despite being outrageously expensive Dubrovnik is certainly not to be missed. The alleyways and churches are full of hidden gems, and you can even escape the city walls for a cheeky clifftop beer. 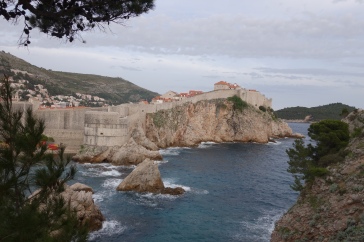 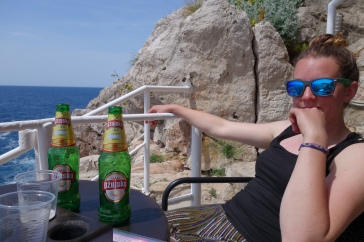 Keen to save our cash after a budget busting lunch we attempted to cross back into Bosnia after sunning ourselves on the beach. Alas, for the first time on our trip, we were denied at the border! It turns out that throughout our stay in Bosnia, we had been thoroughly illegal, travelling without the required green card insurance. Whoops! Heading sheepishly back past the Croatian border guards we snuck off the road to a covert piece of flat ground and pitched up.

Montenegro is the place in the Balkans both of us feel we would most like to return to. Our first day saw us traverse the shores of the stunning bay of Kotor. The lush green mountains rose dramatically from the azure lake, and we stopped to admire the ancient castle walls of Kotor. 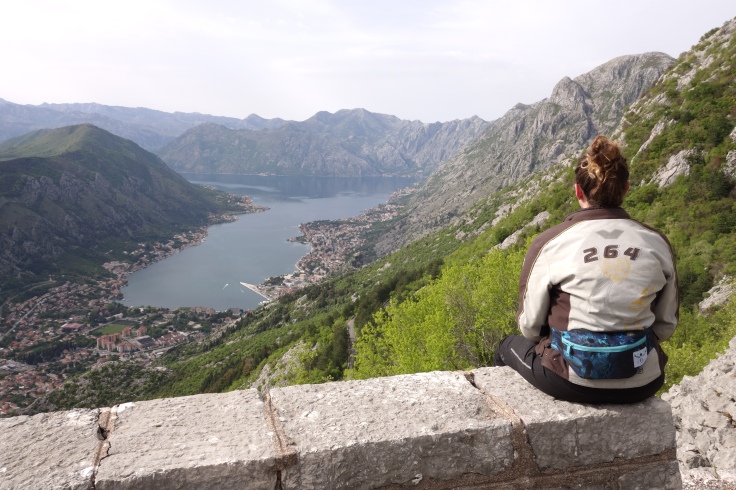 From Kotor we took the dramatic 25 switchback turn road up to Lovcen national park, where the sun quickly disappeared as we headed up and up into the hills. Setting up camp in an abandoned army shelter, we did a Bear Grylls makeover of the ripped tarpaulin and rotting wood, and made ourselves a veritable cooking shelter. The wind was howling as we turned in, whispering to each other about the bears that supposedly roamed the woods around us. 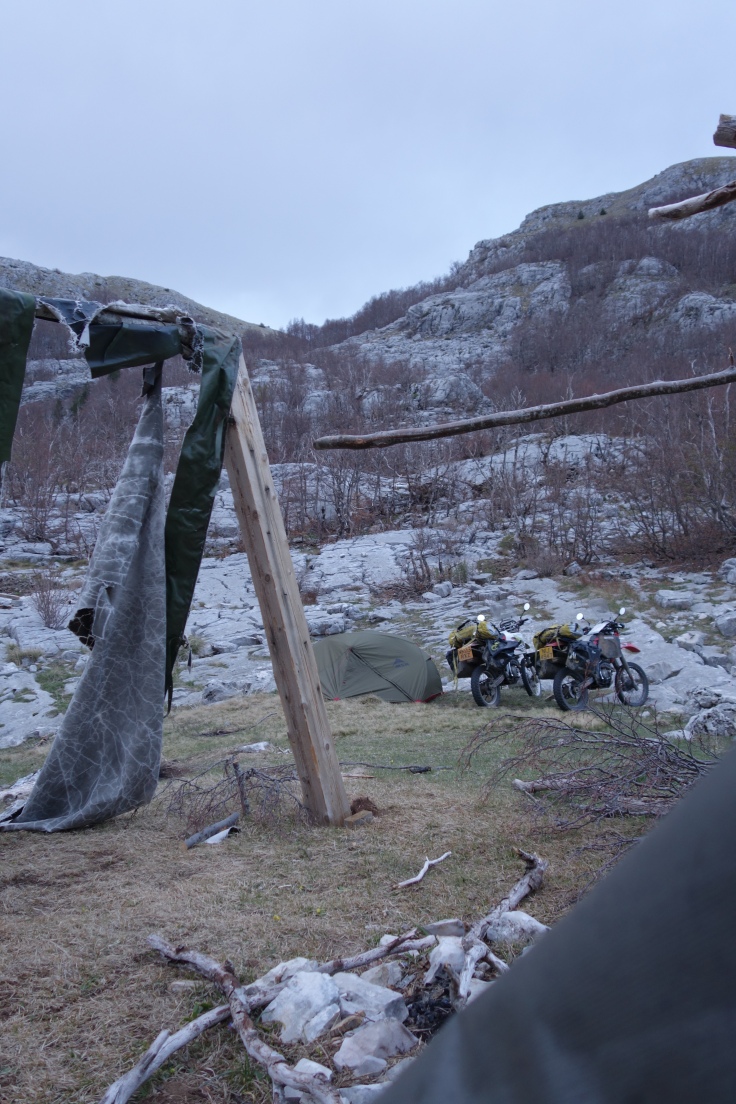 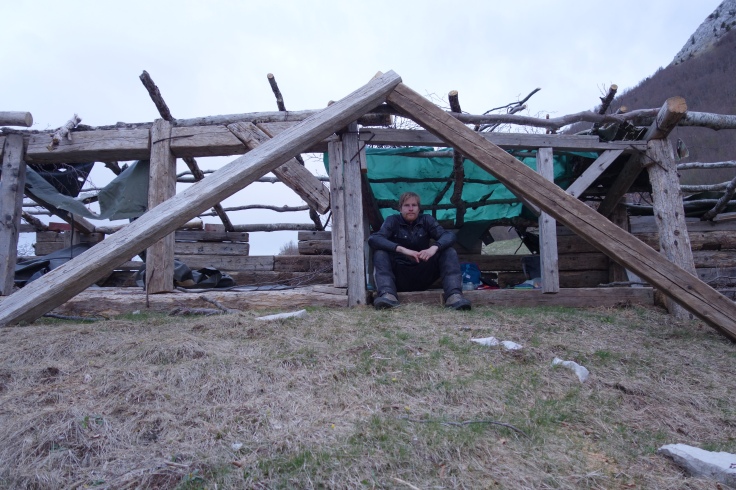 Like the rest of the Balkans, Montenegro is not short of ancient sites to visit. Despite the rain (and at some points snow) we climbed the 449 steps to Njegosev mausoleum. A huge polished marble structure had been placed there to honour Montenegro’s greatest poet. As mentioned before, travelling isn’t always fun, and as we headed down from the hills, we were thoroughly soaked and miserable. The rain showed little sign of stopping as we huddled in a small cafe, and after a mild stint of bickering, we decided to head out and get wet! We couldn’t have made a better decision. The road we chose took us through stunning mountain scenery, and as the weather cleared we happened upon the small village of Donja Briska deep in the Montenegran hills. 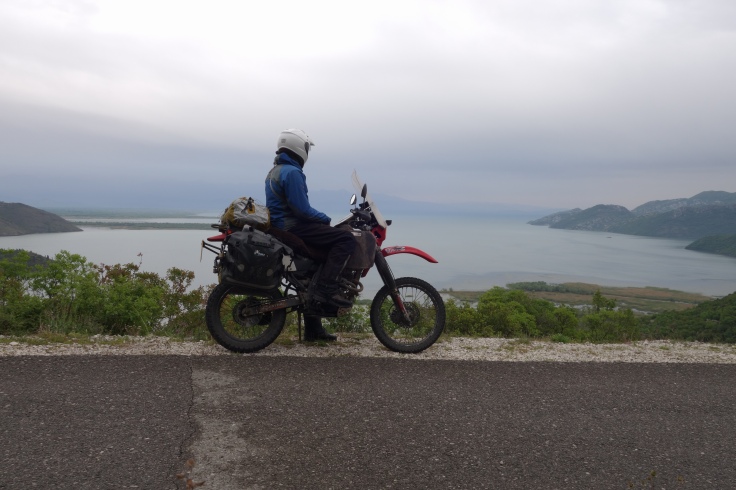 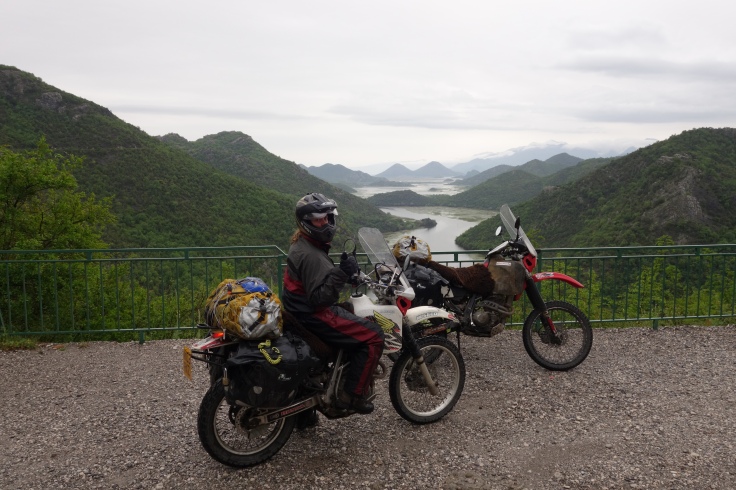 Local farmers kindly let us set up camp on one of their beautiful terraces and plied us with coffee. We only wish we knew more about Liverpool football club-the most popular topic of conversation in remote Montenegro! 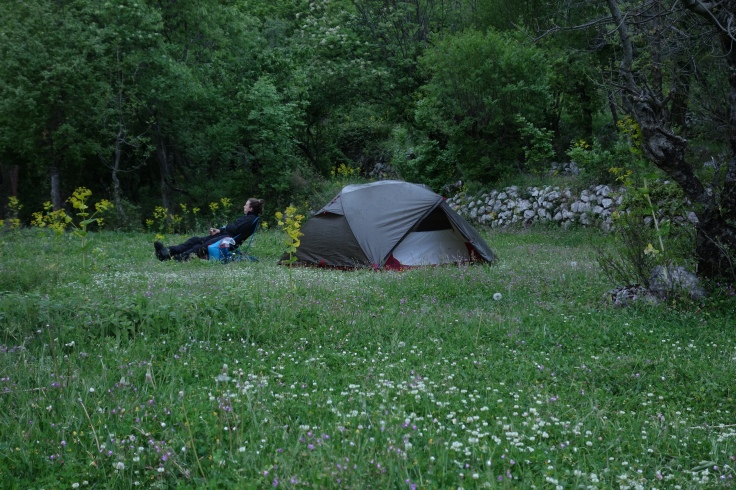 At the Albanian border, we made sure to buy the right insurance, and it was a good job we did! The roads and drivers are certainly not up to our fine British standards, and the border itself was nothing short of chaos! It is safe to say that the roads are becoming significantly more challenging. In Bosnia, the small roads were majoritively gravel, and we took a stunning ride from Sarajevo over the Morzine Highlands, learning the limits of our nerves on wet sand and mud.

In Albania, even some of the main roads were gravel at best, and if you dared take a minor road, you had no idea what to expect. Some roads definitely got the better of us-especially in Albania, where Lottie especially struggled with deep gravel and large boulders. But slowly getting to grips with the sliding of the bike and staying relaxed, the rewards were immeasurable. Traversing these roads allowed us to see remote villages, beautiful mountains, camp by crystal clear rivers and meet local people. 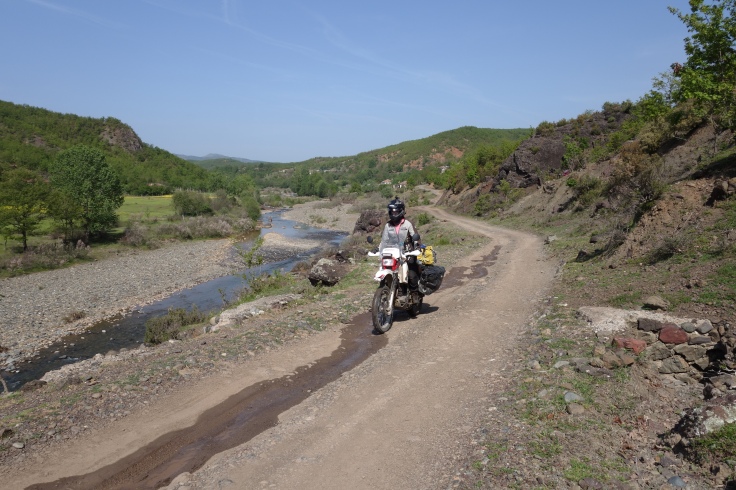 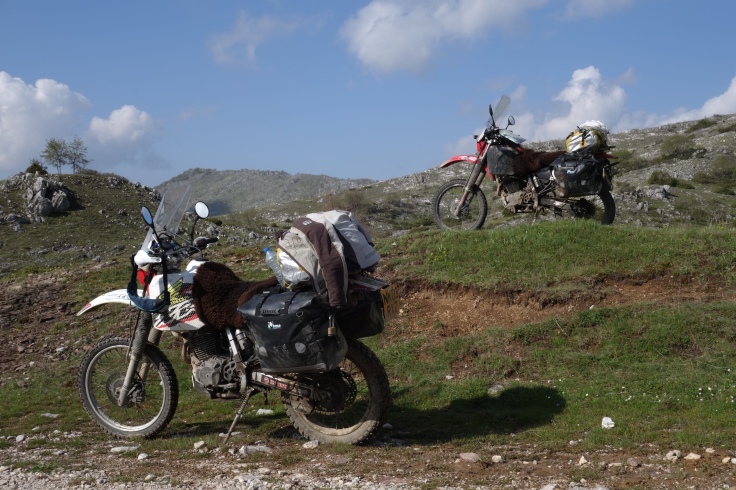 It was in Albania also that we learnt not to appreciate, but not expect, immediate hospitality. Having been approached by a local cow herder, we incorrectly assumed he was inviting us for food at his house. It was only after an embarrassing conversation with his young daughter, we realised that he wanted to sell us milk and beer. The Albanian people were certainly lovely, old men throwing massive waves at us from the side of the roads, bolshy kids coming up to say hello, but there was also an undertone here, an awareness of how to make money from a tourist! This uncomfortable tone was demonstrated most fully when a small child gave us the finger when we waved!

As we have been driving we have struggled a lot with the contradiction between the desire to want to explore the places we find ourselves in more fully, and the desire to make progress towards our destination. This has meant we have sometimes moved on too quickly from places we liked, but has also led to discussions about what we want from our trip. Both of us have come to realise we are much happier outside of the cities where we can be ‘one with nature’ (lol). Bearing this in mind we decided to give ourselves a ‘day off’ when we came upon a picturesque (and perhaps bear infested) campsite by the Black Drin river in Albania. We spent a day in the sunshine, swimming in the ice cold river, dining the laundry and reading our books. 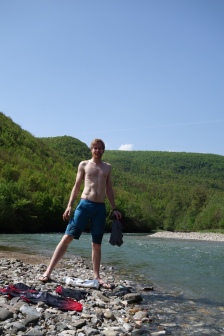 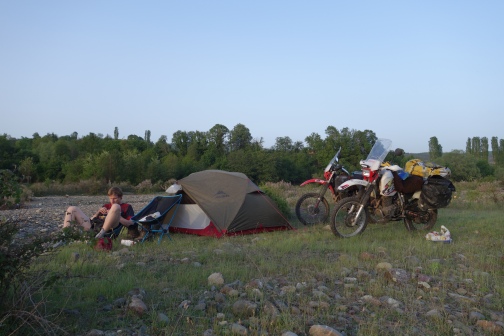 On consulting the map, we discovered that the river was actually the border with Macedonia! So what else was Ryan to do! He waded into the river, unofficially crossing the border to take an illegal poo! The highlight of the day, he was happy to report that Macedonia ‘smelt like shite’. 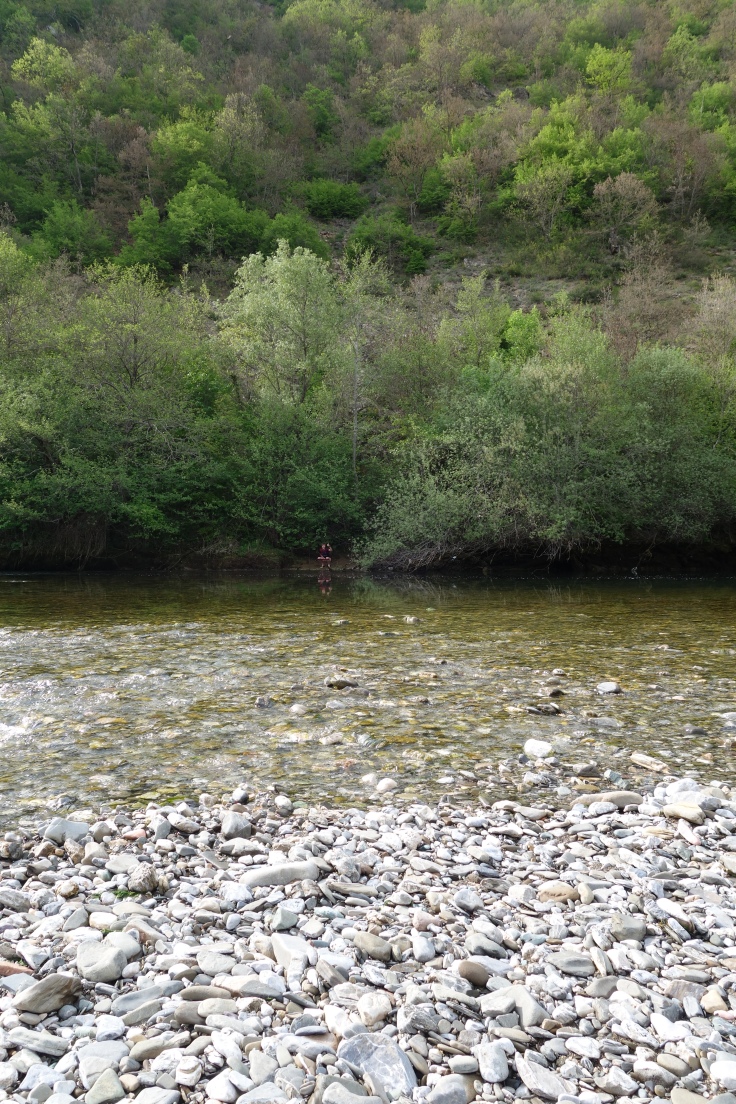 The Balkans were an absolute delight, we stuffed ourselves with burek (filo pastry stuffed with cheese, spinach or meat), ate countless cevapi, crossed stunning mountain ranges on unbelievable roads, and felt the post war optimism of the warm hearted people. We cannot recommend the Balkans enough as an ‘off the beaten track’ destination. To be honest, we are quite sad to have left, but we are certain it won’t be long until we are back! 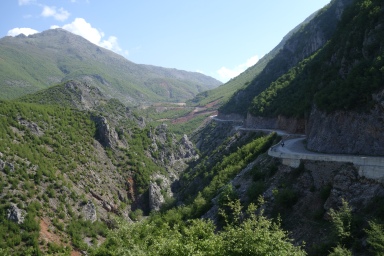 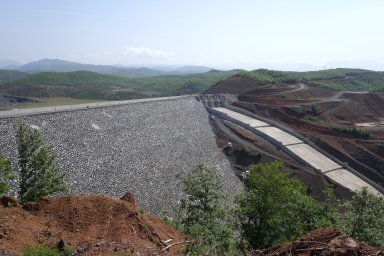 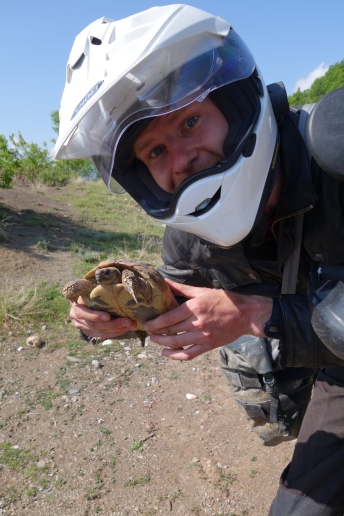