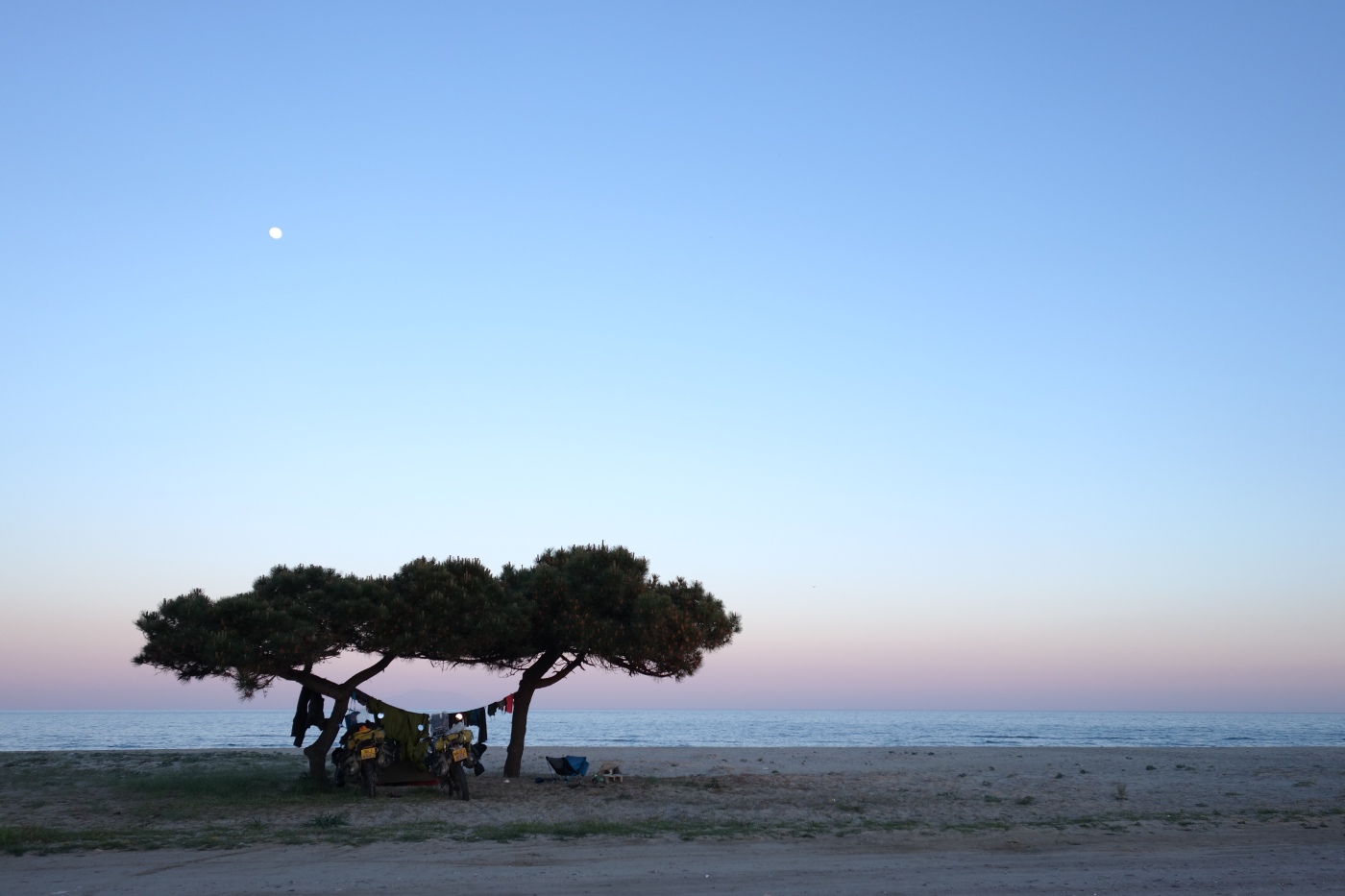 ‘Move aside, move aside.  I say, make way for we are British don’t you know!’….. It was surprising to find that colonial era etiquette was still being practiced when we passed through the border from Albania to Greece as border guards moved cars, buses and trucks aside to allow we, 2 British motorcyclists, to the front of a very long, hot and frustrated queue.

We had really enjoyed the previous few weeks touring through the Balkans but were also pleased to be returning the EU.  After all, this may be the last time that we can visit so easily depending on how Brexit negotiations go whilst we are away. Still more important to us was exploring some of Greece’s rich culture, enjoying a selection of its delightful foods and mostly, getting some much needed laundry done. So with that in mind we made a beeline for Thessaloniki and our hostel, Hostel Arabas (www.hostelarabas.gr).

Arabas was a great hostel, hidden deep in the old streets of a fascinating city. It was busy and full of fellow travellers all with their own interesting stories and adventures, so it didn’t take long for us to get out and enjoy exploring the city with good company.

We initially only intended to stay for 1 night but with lots of historical sights and the allure of a decent night out being planned, we were happy to enjoy the comforts of a real bed for a second night. It being our first time in Greece, our meal in a little Greek taverne was a taste sensation and Lottie, the philosophy buff, was able to appreciate Thessaloniki’s pride of Aristotle (although neither of us are yet clear on his connection to the city). 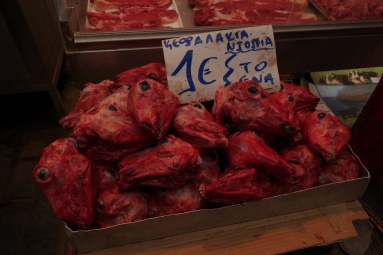 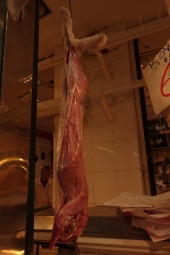 Rabbit! Look at its fluffy feet 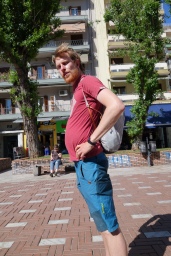 Departing Thessaloniki we trundled east in the direction of some abandoned thermal baths which we had been tipped off about by a German cycle tourer (there are many of them…) called Oler.  He told us about the hippy commune who lived in the abandoned buildings, and the prevalence of nudity, but not about the strong eggy smell of the sulphur dioxide as it bubbled out from the numerous thermal springs. Still it was great to soak in the warm waters and relieve the days saddlesore, especially as a thunderstorm broke right overhead and hurled massive hailstones and lightning bolts in our direction! 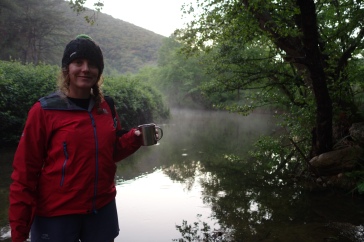 Enjoying the eggy smell with a cup of wine 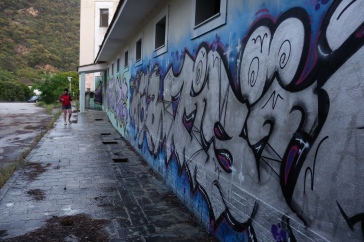 Our final few days in Greece were quite uneventful really.  We stopped in some nice towns such as Kavala and Alexandrapoulis to fix our caffeine cravings or devour an ice-cream served inside a donut but didn’t really explore much, nor did we even try to. 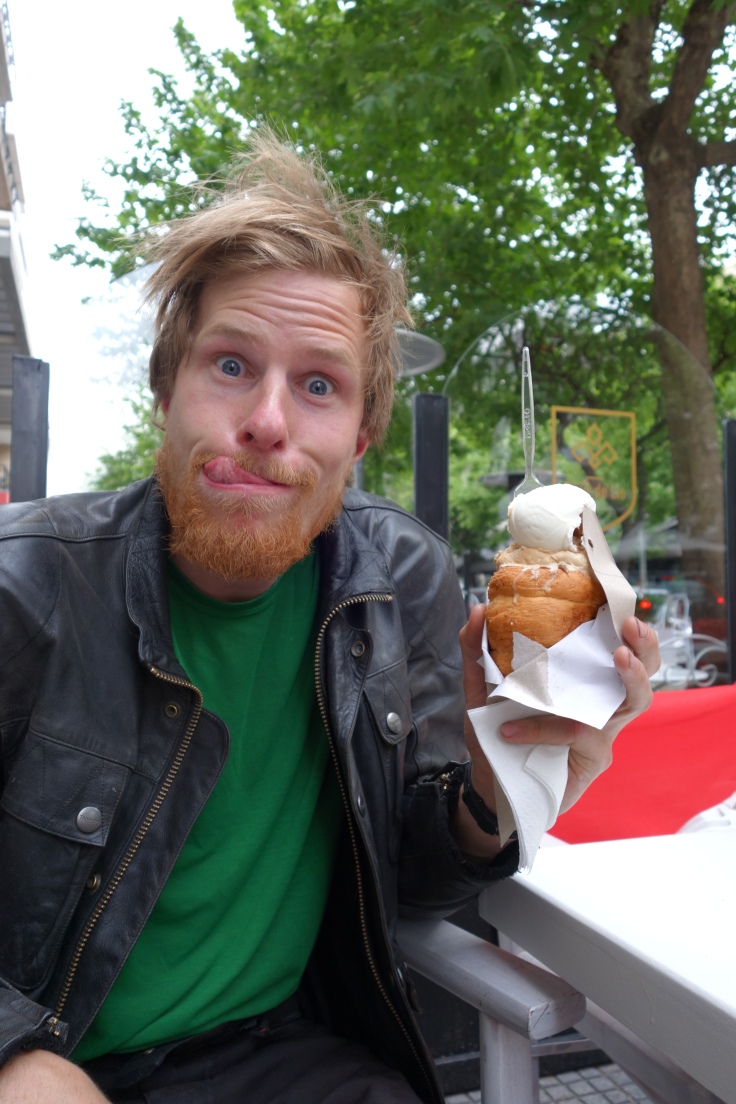 We were more interested in getting out of the cities and onto the beaches which turned out to be great places for sunbathing, swimming and camping. 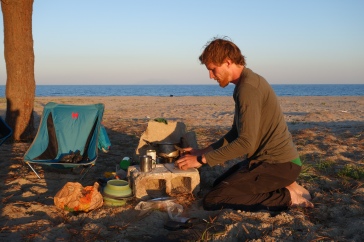 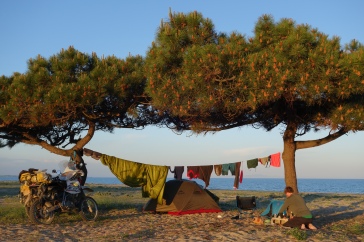 It was only a quick scoot through Greece, so barely enough to make an opinion but the country has left us with mixed feelings. We had high expectations of the food and historical sights which certainly didn’t disappoint. 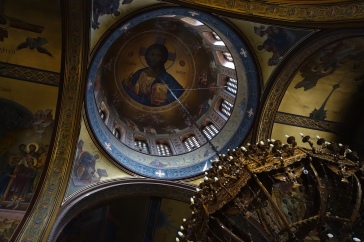 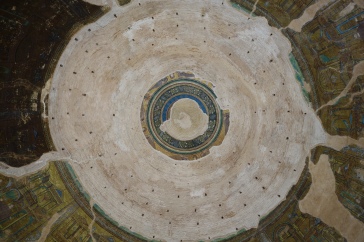 Also, the Greek people were friendly and accommodating despite trying to speak to us in German all the time (it must be our Aryan looks). However, on the whole the country was surprisingly expensive, especially petrol and oil (which our bikes need plenty of) and the scenery was not as dramatic or impressive as its balkan neighbours that had blown us away with their beauty.  It was perhaps our least favourite country that we have visited yet, but we would definitely still return to explore it properly.

The expense of Greece and the generosity of its people were perhaps highlighted best when we bought oil from a young salesman at the excellent Honda garage in Xanthi.  He explained to us that Greece has the highest youth unemployment in Europe, those who were fortunate enough to have jobs had a minimum salary which had been reduced to only 400-500 Euros per month, yet the cost of living had exploded and pensions had disappeared.  Despite this he still heavily discounted our oil because it was too expensive for us and he liked our bikes. 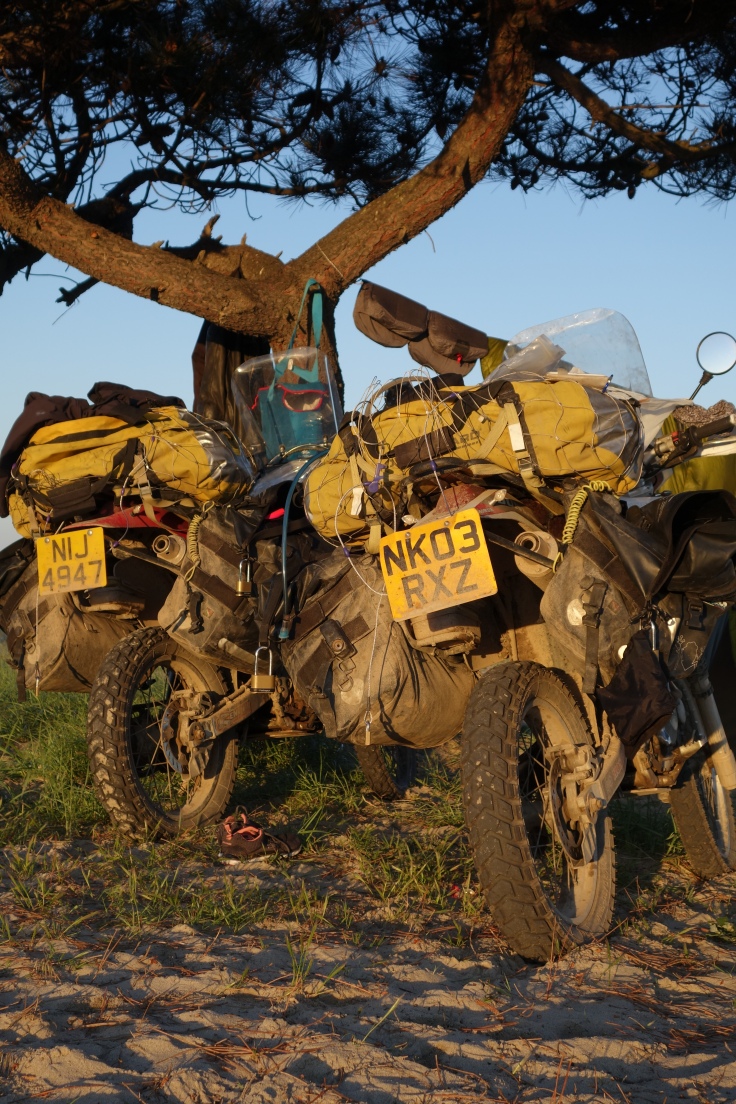 Most disappointing about our trail across Greece tough were the good, fast but very boring roads.  Keeping to our plan of no motorways, we selected main and minor roads that took us west to east in a fairly direct route. We came across only 2 sections of gravel as we made our way to isolated wild campsites, and there were some great twisting sections of tarmac, but a majority of the roads were dead straight and not particularly interesting except for the numerous tortoises trying to cross them. This left us struggling to keep our eyes open and even Lottie longing for the challenging dirt roads we had fumbled our way through in Bosnia and Albania.

Perhaps we should be careful what we wish for though, as next up is Turkey, our first steps into Asia and some vast distances that could take us years if we don’t come across equally as efficient roads.  Still that’s all part of the adventure, ‘que sera, sera’.